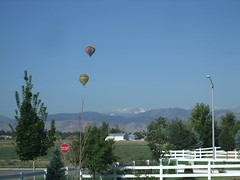 I wrote a few months ago about my eventual move to Colorado. After much effort, we’re finally here. My wife and I drove the 1520 miles from Blacksburg this past weekend and we’re trying to get settled.

On my prior post both here and on my climbing blog, many asked where I was planning on living and offered up a bunch of suggestions. We had to do a quick close on our house and had only two weeks to find a place to live during the busiest time of the year. We ended up renting in the southwest part of Longmont. It seems like a decent compromise – the area is much cheaper than Boulder and still only 15 minutes away. We’ll see how we enjoy it along with exploring everywhere else on the Front Range and hopefully will find a house and an area we like best.

So far (it’s only been a week), we love it here in Colorado. The weather has been awesome. When Coloradans boast of 300+ sunny days a year here they’re not kidding. Every single day the sun has been out. Even on the day we arrived it rained, but the sun was shining the rest of the afternoon.

(BTW, the picture above was taken from my living room. You can see the foothills and the Rockies. I have no idea what was up with those hot air balloons, but they were cool to see!)

Tom currently works in developer relations for IBM Watson. A serial entrepreneur, he's been the founder of numerous startups including Investify and StatsMix, a Techstars alumni company. Tom lives outside Boulder, Colorado and in his free time he's an avid rock climber, skier, and trail runner.